> Chasselas For Ever DVD 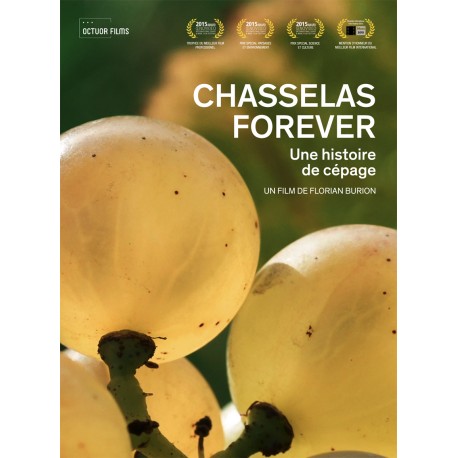 Chasselas For Ever DVD

A voyage of discovery through the treasures of canton Vaud's vineyards

A voyage of discovery through the treasures of canton Vaud's vineyards

In collaboration with legendary winemaker Louis-Philippe Bovard, the well-known Swiss wine author Chandra Kurt takes a closer look at a global wine phenomenon – the Chasselas grape. Although it is grown all over the world, it is mostly enjoyed as a table grape. Not so in Switzerland, where Chasselas is the most important variety of white wine grape, especially on the shores of Lake Geneva, where it originates.

“Chasselas is like Chanel – timeless, elegant, feminine, classic. Pure understatement, which is what makes haute couture”, says Chandra Kurt. Because even though Chasselas may appear moderate and humble, there is unbelievable character and force in this grape.

Chasselas – From Féchy to Dézaley is not just a wine book, but a treasure trove of traditional recipes from Vaud. They are easy to reproduce and go perfectly with a glass of Chasselas. Illustrated with unique woodcuts from 1935 by Paul Boesch and modern photographs by Patricia von Ah.

Louis-Philippe Bovard, the Grand Seigneur of Dézaley, a lawyer and economist by training, was born in 1934 in the heart of Lavaux. He holds particularly dear his relationship to his background, heritage and the culture in which he grew up. He took over the family winery, representing the 10th generation, after working in advertising and as the director of commercial fair Comptoir Suisse. He questioned many of the local winemaking traditions, retaining only the best. Among these, of course, was keeping Chasselas as the main grape variety; he also pushed to revive Gobelet pruning and advocated maturing Chasselas on its lees and in barrels.

At the same time he introduced grape varieties that included Syrah, Chenin Blanc and Sauvignon Blanc to Lavaux. Today he is predicting a great future for Merlot along the banks of Lake Geneva. He is also a driving force behind several projects devoted to Vaud wines, such as the Musée de la Vigne et du Vin in Aigle, the study of Vaud terroirs and climates, and the Conservatoire Mondial du Chasselas, which is dedicated to the appreciation of ancient varieties of this grape. It is his will to assure the continuation of the domain whose owners have been called Louis for the last 10 generations. Together with his wife, he established the non-profit foundation Fondation Louis-Philippe et Anne-Christine-Bovard, dedicated to the protection, present well-being and future development of the vinicultural region of Lavaux. Today, the Domaine Louis Bovard in Cully plays a major role in Lavaux, cultivating 13 hectares of vines, of which 4 are planted with Dézaley Grand Cru.

The Bovard winery in Cully today plays a key role in Lavaux; Louis-Philippe manages, with his nephew, the 16 hectares of vineyard, of which 4 are in the Dézaley Grand Cru designated area. Louis-Philippe Bovard travels throughout the world to sing the praises of Chasselas and to represent Vaud wines. I had the opportunity to accompany him in Tokyo in 2013, a journey that appears in this book.

Louis-Philippe has also contributed to this book his thoughts on a number of key words: Lake Geneva, Chasselas, Drinking wine, Gastronomy wine, Vaud terroir, Dézaley, Heritage, A passion for wine.